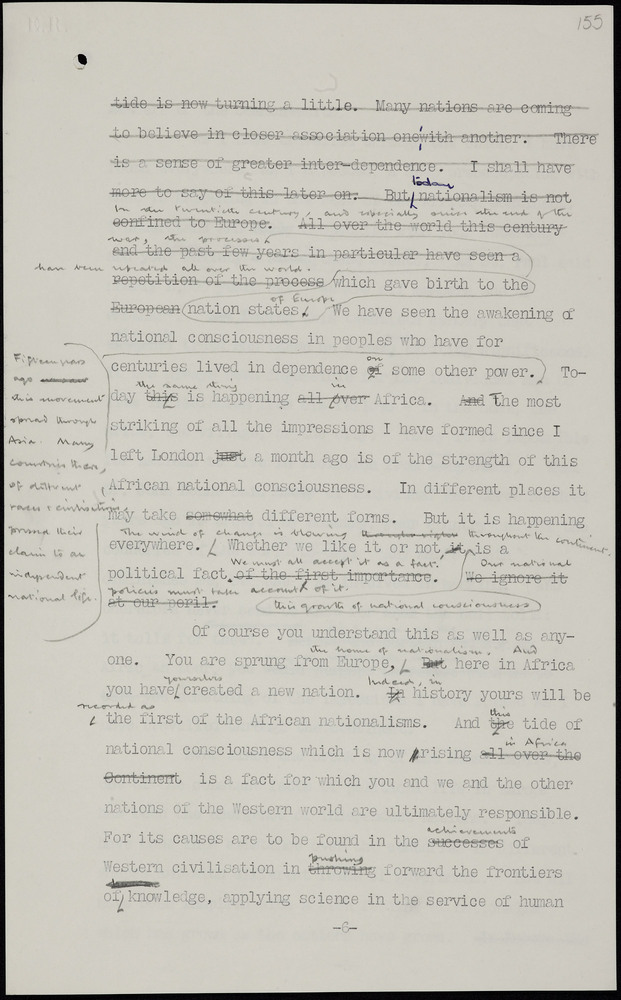 Zoom in
Macmillan dep. d. 788, fol. 155r
By kind permission of the Macmillan Trustees
Previous Next

The Bodleian has the papers of seven former British Prime Ministers. Displayed here are extracts from the draft and final copies of the famous speech given by Harold Macmillan at the joint meeting of both Houses of Parliament of South Africa, on Wednesday, 3 February 1960. It was the culmination of Macmillan’s tour of Africa, the first by a British Prime Minister while in office. In the very heartland of white minority rule Macmillan declared that a tide of nationalism was spreading across Africa, and that African majority rule was a political inevitability. Under Macmillan’s leadership ten former British African colonies achieved independence.

The draft shows that the most famous sentence of the speech – ‘The wind of change is blowing throughout this continent’ – was a late addition.

The most striking of all the impressions I have formed since I left London a month ago is of the strength of this African national consciousness. In different places it may take different forms. But it is happening everywhere. The wind of change is blowing throughout the Continent. Whether we like it or not, this growth of national consciousness is a political fact. We must accept it as a fact. Our national policies must take account of it.