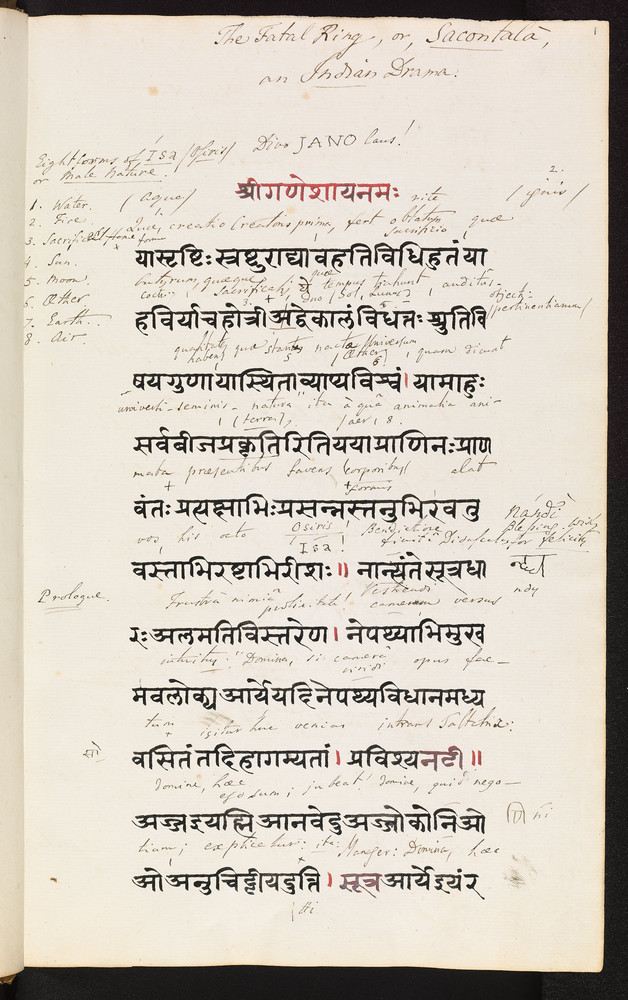 Kalidasa, The Recognition of Sakuntala

This manuscript contains the first translation of a classical Sanskrit play into English. Kalidasa, who flourished perhaps around the fourth century AD, was the greatest writer in Sanskrit. Here, a scribe, Lala Mahatabaraya, has skilfully written out the text of Kalidasa’s masterpiece, Sakuntala. Between the Sanskrit lines the great 18th-century orientalist William Jones, a fellow of University College, Oxford, has then written a Latin translation. This is followed by Jones’s English translation, at the end of which he recorded: ‘This translation was finished at my gardens on the Ganges 17 Aug. 1788. W. Jones’. His achievement is all the more remarkable because Brahmins were reluctant to teach foreigners the language of their sacred texts.

Prologue, translated into English by Jones:

‘WATER was the first work of the Creator; and Fire receives the oblation of clarified butter as the law ordains; theSacrifice is performed with solemnity; the two Lights of heaven distinguish time; the Public Ether, the vehicle of sound pervades the Universe; the Earth is the natural parent of all increase; and by Air animals become animated; may ISA bless and nourish you, the Power propitiously visible in these eight apparent forms!

The Benediction, called Nándi, being ended, the Manager says: ‘It were improper to be very prolix’ – Then, looking towards the Népat’hya, or Green room, he calls out: – ‘Madam, when the business of the dressing room is completed you will come hither. …