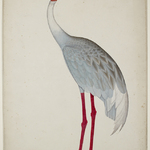 This Treasure is paired with: Sarus crane (Freedom and confinement)

‘Oxford taught me to value humankind’, said the pro-democracy leader Aung San Suu Kyi on receiving her honorary Doctorate of Civil Law in 2012. She had studied here in the 1960s, and catalogued Burmese manuscripts for the Bodleian in the 70s. After enduring nearly two decades under house arrest and in prison, she led Myanmar’s National League for Democracy party to victory at the polls in 2015. Her portrait is included in Mariana Cook’s series of photographic studies, Justice.