Zoom in
MS. Sanskrit a.7
Bodleian Libraries, University of Oxford
Previous Next

Aṣṭasāhasrikāprajnāparamitā (Perfection of wisdom in 8,000 verses) 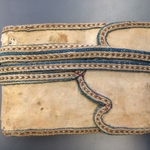 This Treasure is paired with: Shikshapatri (Veneration)

The Buddha addresses the Hindu deity Indra, one of several scenes illustrating his life in this early Mahayana Buddhist philosophical text. These illustrated manuscripts were treated as objects of worship, rather than texts to be studied, and survive often in excellent condition. This one is from the earliest period of illustrated palm-leaf manuscripts in India, copied at the monastery of Nalanda in the 11th century for a female lay donor.